At 12 km north-east of Kampot, Bos Tra Bek Village within Trapang Pring Commune houses a 6th century Hindu temple located in a cave. The mountain covers an area of 800 by 700 meters and stands roughly 70 meters tall. Covered in small trees, bushes and vines, this hill is scattered with a number of caves housing shrines. 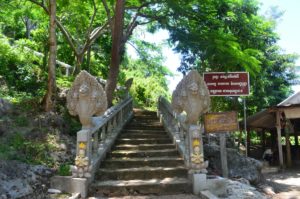 The big rock at Skor Thom Cave is said to produce a loud loud when knocking the rock resembling a monk beating a drum during Pchum Ben (the 15day Buddhist celebration held for the dead). 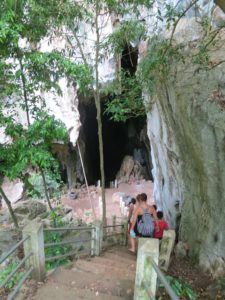 The rocks within Pheach Meas Cave light up like diamonds when exposed to sunlight.
Tmar Pleng Cave is rich in stalactites, which make beautiful sounds when knocked on.
The locals are always very helpful showing the resemblance of sor. rock or stalactite formations to animals like elephants, eagles, crocodiles and cows,
some being quite obvious and others requiring considerable imagination. 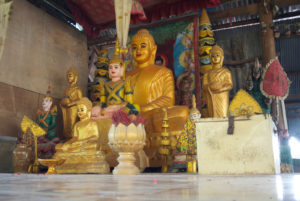 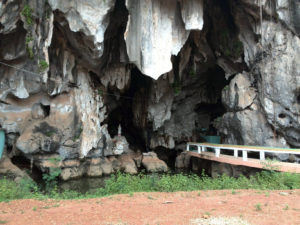